I don’t read many books about gardening. Scratch that, I have almost never read a book about gardening. But I absolutely adore gardens, and the moment I picked up Monty and Sarah Don’s The Jewel Garden the photographs alone transported me to the type of country garden I love best: a little unruly, abundant and colourful.

The book is a dual biography, with the two author/subjects taking it in turns to tell parts of their story. Sometimes the narrative switches at every paragraph; sometimes you get pages of Monty followed by pages of Sarah. Incidentally, Monty is Don’s stage name, the moniker of his public persona; his family all call him Montagu. Him I recognised from the TV programmes, and I knew about Sarah from their book Fork to Fork, but what I didn’t know was that they had been fashionable jewellery designers in Knightsbridge before leaving the rat race for the good life in Herefordshire. They fell in love at Cambridge, where Monty was an older-than-average English undergraduate and Sarah already married to an academic biologist.

She left her husband for the earthy charms of this passionate younger man, and their marriage has survived 32 years, the collapse of their business and Monty’s countless periods of depression. Their life together in the jewellery trade inspires the creation of the eponymous Jewel Garden, reflecting the ‘jewel’, ‘brights’, ‘pastels’ and ‘crystal’ of gem stones. The descriptions of creating their Herefordshire garden following the desperate years of the business’ collapse are lyric and uplifting. For me, these passages spark both memory and fantasy.

The farm cottage as we knew it

The memories are of the great country house estate garden where my father worked and which his children were lucky enough to have as an outdoor extension of their imaginations. We lived in a tied farm cottage on the edge of the estate, but we nearly didn’t live there at all. Much like for the Dons, our move created triumph from disaster, but only just. In 1990 my father’s business went bankrupt (at almost exactly the same time as the Dons) and with it came the repossession of our house, surety against the  business loan. My mother was working part-time for a large country estate, and her employers took pity on the family, allowing us to live in the cottage and employing my father as a gardener. The cottage itself was nothing special – only the width of one room and perishingly cold in winter – but the real bonus was the proximity of the estate’s great Victorian walled garden.

The main estate house with garden

Peach trees espaliered down the red brick garden walls, gooseberry bushes huddled in shallow border lined with ancient up-ended green glass bottles, and every section of the garden was edged in ancient box. A sunken greenhouse hunkered down in the middle, where my dad grew his prize-winning tomatoes with their sweet pungent summer scent, and by the gate grew an immense bush of lemon balm mint, through which I ran my fingers on the way to school and back each day. Although that garden was a hundred years or more older than the one the Dons created (and further east by the entire width of England), the feeling of being subsumed into the verdant Englishness of the country garden is the same.

This is where the fantasy side begins: I of course want to create something like the Dons’ Jewel Garden now, as an adult about the same age as the Dons when they first moved to Herefordshire. As someone born in the country but living in a city, I want to wake to feel the frost on the window pane, to be able to walk out into my own garden and pick the flowers and fruit I have grown. I want to have the space to create something organic and beautiful and a little wild. I’ve always been a sucker for The Good Life and this book encourages me further. Of course, like most armchair gardeners I have very little skill or knowledge when it comes to the practicalities of making a garden. Although I did spend a lot of time in the garden with my father as a child, it was to indulge in all the outdoor pursuits best-loved by children: picking raspberries, eating tomatoes fresh from the vine, and playing hide and seek behind the hedges. 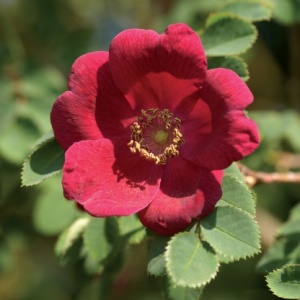 At nearly 30, my vocabulary is the limited one of a town-dweller. A rose for me is just that, but for the Dons it is always a r. hugonis or a r. cantabrigiensis in the spring, or a r. moyesii or r. sericea pteracantha in the high summer. 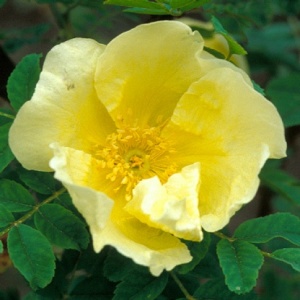 Poppies are opium, Welsh or oriental; clematis ‘Gipsy Queen’ or ‘Niobe’. The vocabulary is intoxicating in its precision; it embodies the history, imagination and passion of thousands of antecedent gardeners. Although I can’t imagine what each individual variety looks like precisely, I can imagine the sweetness of their scent and the giddy sense of sheer vibrant life that they give off. This is what The Jewel Garden enables its readers to do: build the beautiful imagined gardens of their memories and dreams, without any of the back-breaking hard work that would have to go into it in real life. 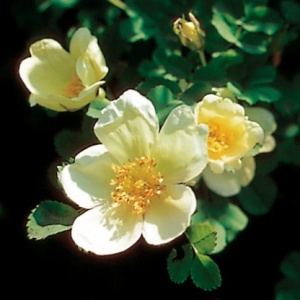 The Dons have done the groundwork for us, and the result is beguiling.