Each of us has the potential to hold a thousand different languages on the tip of our tongue. Even if we have nothing more than a smattering of schoolgirl French or the ability to order a glass of wine in Greek, within our mother tongue lie several hundred possible modes of language, each one individually special and specific.

The use of Latin plant names, unapologetically untranslated, in English represents straight-forward borrowing, words imported wholesale and their rules applied to each new hybrid as it emerges from the ground. But there are many more subtle tongues being spoken every day, ones flying so low under our daily radars that we probably don’t even think of them as languages. But in many ways they are: compare the cable and casting off of the knitter against the casting off and cable of a sailor, the builders’ kentledge against the printers’ colophon. The rosin and vibrato of a violinist, the anemometer and the quadrant of the geographer, the gomme and gouache of the painter. Each special skill offers the acolyte a shibboleth – how do real horticulturalists pronounce corymbs and guelder, proper teachers say Melpomene and Calliope? The hunter’s tack is a world away in meaning from the seamstresses’ word for the same, the language of the hack for the horse and the news hinting at the different universes inhabited by both. These idiolects of trades and interests can be both ancient and modern: ‘a bit of 2-by-4’ and an RSJ are immediately understood by a builder but may mystify a hairdresser, who would be more familiar with an upsweep and a fauxhawk.

This is a fairly roundabout way of approaching Katherine Swift’s The Morville Hours, but the reason for doing so is because Swift is so astonishingly good at entwining the languages of gardener, builder, priest, beekeeper and a multitude of others into her narrative. The Morville Hours tells the story of Swift’s life and garden using the dual frameworks of the mediaeval book of hours on one hand and England’s traditional horticultural calendar on the other. Both are potentially off-putting subjects in their extreme specificity and almost complete irrelevance to our city-centred modern lives, but in Swift’s exquisite prose both become fascinating and beautiful in their complexity. I found that although I didn’t know what many of the words Swift used meant precisely – the list includes terce, none (pronounced to rhyme with ‘one’ and ‘stone’, not ‘bun’ and ‘fun’), achillea ptarmica, and a hundred other plant names. But it didn’t stop me understanding Swift’s story, and I didn’t mind not knowing as she made me feel that a world was opening up to me through these words, not shutting me out. The Morville Hours is a magical book in that it has the power to transport, translate and transmorgrify things of which I was completely ignorant into fascinating subjects that I just want to more and more about. 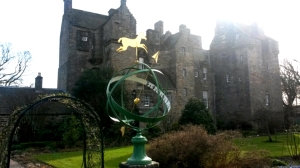 It also made me long for the outdoors, for a life lived closer to the soil and the seeds. It made me miss my birthplace in the south of England, which was so much warmer and more verdant than the colder climes of Scotland. But it also inspired me to go on a visit: to Kellie Castle, a National Trust for Scotland property close to the Fife coast. Like the Dower House at Morville where Swift made her incredible garden, the Castle was home to what are known as ‘improving tenants’, people who live in a property but pay a lower rent because they have offered to improve the building or gardens on behalf of the owner. At Kellie the ‘improving’ family were the multi-talented Lorimers, best-kent among them sculptor Hew Lorimer (he who made the Lady of the Isles on South Uist and carved the seven allegorical figures on the front of the National Library of Scotland in Edinburgh), architect Robert Lorimer and artist John Henry (J.H) Lorimer. Inside the house they sensitively restored the building and filled it with beautiful furniture, either of their own making or from the periods spanned by the house’s history. Outside they rebuilt the castle’s walled gardens and created beautiful spaces in which people could while away many a happy outdoor hour. Many of JH’s paintings perfectly capture the play of light on the buildings and grounds at Kellie, and below is one of my favourites – Happy Easter! 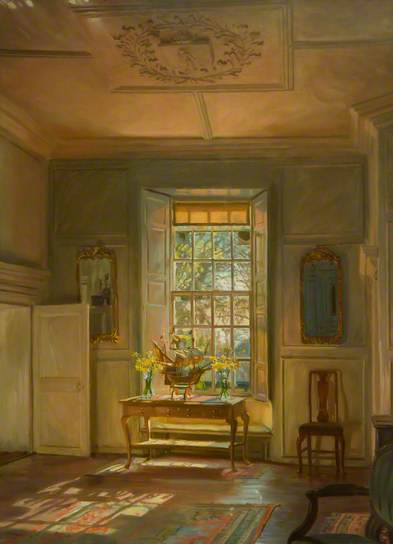 Sunlight in the South Room (c) The National Trust for Scotland, Kellie Castle & Garden; Supplied by The Public Catalogue Foundation